The lebelinoz family went to a party! 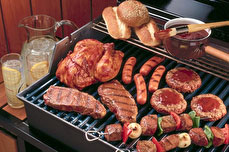 Every once in a while, one of our friends might actually forget how painful it is to have two autistic kids at a house party.  It's happened again today.  Let's check the old LeBel-party scoreboard…

Number of times the hostess told Mr LeBel to

Number of people staring at the kids until they were either bitch-slapped or told the kids are autistic:  one

Number of suicide attempts by:

Which proportion of the suicide attempts were successful?  0%

Number of meals successfully eaten (max one per person):

Number of minutes endured until the children became unbearable and it was time to leave:  100 minutes

The final score, therefore, is acceptable.  Not bad.  The shriek cost us dearly, but may have saved us the huge penalty score for a successful suicide attempt.  Maybe next time, we'll prepare the kids with a few social stories and possibly even manage to cram a hotdog into one of the children... Then again, maybe next time Mrs LeBel will actually slap a pompous mom with normal kids and a staring problem!
Posted by lebelinoz at 3:19 AM

lebelinoz
I have two autistic children. I like to blog and I hope to give a father's perspective on life with autism.